(MENAFN – Asia Times) Seyyed Ebrahim Raisi will be sworn in as the 8th President of Iran in Parliament (Majlis) on Thursday (August 5th), two days after he was officially confirmed by the leader of the Islamic Revolution, Ayatollah Khamenei.

Iraqi President Barham Salih and other heads of state, foreign ministers and representatives of the UN Secretary General, OPEC, the EU, the Eurasia Economic Union and the Inter-Islamic Union will attend the ceremony in the Majlis.

The Islamic Republic of Iran is now entering a new era in more ways than one. Khamenei himself outlined its contours in a short, sharp speech “The Experience of Trusting the US”.

Khamenei’s strategic analysis was conveyed even before the final outcome of the negotiations on the 2015 nuclear deal with Iran in Vienna, which I covered in my Asia Times eBook Persian Miniatures. It turned out to be a precaution: “During the negotiations I kept saying that they would not keep their promises.” And so experience tells us in the end that this is a deadly poison for us.

During the Rouhani government, Khamenei added, “It became clear that trusting the West does not work.”

With excellent timing, a new six-volume book, Sealed Secret, was co-written by outgoing Foreign Minister Javad Zarif and two top negotiators for the Joint Comprehensive Plan of Action nuclear deal, Ali Akbar Salehi and Seyed Abbas Araghchi (who is still involved in the current, deadlocked Vienna debate ) will be released this week – for the time being only in Farsi.

Professor Mohammad Marandi from the University of Tehran summed up the roadmap that lies ahead for me: “Iran’s foreign policy decisions are pretty clear. Iran will place less emphasis on western nations, especially European ones, and more weight on the global south, the east, the neighboring countries – and that of course includes China and Russia.

That doesn’t mean that Iranians will ignore Europe altogether if they choose to return to the JCPOA. The Iranians would accept if they honor their commitments. So far we haven’t seen any signs of this. “

Marandir referred to Khamenei’s speech: “It’s pretty clear. He says: ‘We don’t trust the West, the last eight years have shown that.’ He says the next government should learn from these eight years of experience. “

But the greatest challenge for Raisi will not be foreign policy, but the domestic political framework, in which the sanctions are still tough: “In terms of economic policy, it will tend more towards social justice and a departure from neoliberalism, the safety net for those who are disenfranchised and vulnerable. “

It is quite fascinating to compare Marandi’s views with those of a seasoned Iranian diplomat who prefers to remain anonymous and who is very well positioned as an observer of the domestic conflict:

The diplomat adamantly stresses “the importance of looking after our internal capacities and capabilities while maintaining strong economic ties with our neighbors, as well as with Russia, China, Latin America and South Africa – as well as maintaining mutually respectable relationships with Europeans and countries When the US government changes its behavior and accepts Iran as it is, it does not always try to overthrow the Iranian state and harm its people by all possible means. “

The Iranians are heirs to a tradition of fine diplomacy that goes back at least 2,500 years. Our interlocutor therefore had to emphasize once again: “The Supreme Leader never said or believed that we should cut off our relations with the Europeans. On the contrary: he firmly believes in the idea of ​​“dynamic diplomacy”, also with regard to the USA; He said several times that we have no problem with the US if they treat us with respect. “

Now let’s take a trip back in time

There are no illusions in Tehran that Iran under Raisi, even less than under Rouhani, will not remain the target of multiple “max pressure” and / or hybrid war tactics employed by Washington and NATOstan, including gross false flags, where the entire combo is celebrated by US think tankland analyzes written by “experts” in cabins within the belt.

All of this is irrelevant to what really matters on the Southwest Asian chessboard.

In his 1951 classic L’Empire des Steppes, the late René Grousset pointed out “how Iran, which has been renewing itself for 50 centuries”, “has always shown an astonishing continuity”. Because of this strength, the Iranian civilization, like the Chinese civilization, has assimilated all foreigners who conquered the ground, from the Seljuks to the Mongols: “Each time, due to the splendor of its culture, Iranism plunged into a new renaissance with new vitality . “

The possibility of a “new renaissance” now implies a step beyond the “neither east nor west” conceptualized by Ayatollah Khomeini: it is rather a return to the Eurasian roots, Iran is reviving its past in order to tackle the new, multipolar future.

The political heart of Iran lies in the sophisticated urban organization of the northern plateau, the result of a rolling millennial process. During the “fifty centuries” of Rene Grousse t, the plateau was the home of Iranian culture and the stable heart of the state.

Around this central area there are many areas that are historically and linguistically linked to Persia and Iran: in eastern Anatolia, in central Asia and Afghanistan, in the Caucasus, in western Pakistan. There are also Shiite areas of other ethnic groups, mostly Arab, in Iraq, Syria, Lebanon (Hezbollah), Yemen (the Zaidis) and on the Persian Gulf (Bahrain, the Shiites in Hasa in Saudi Arabia). 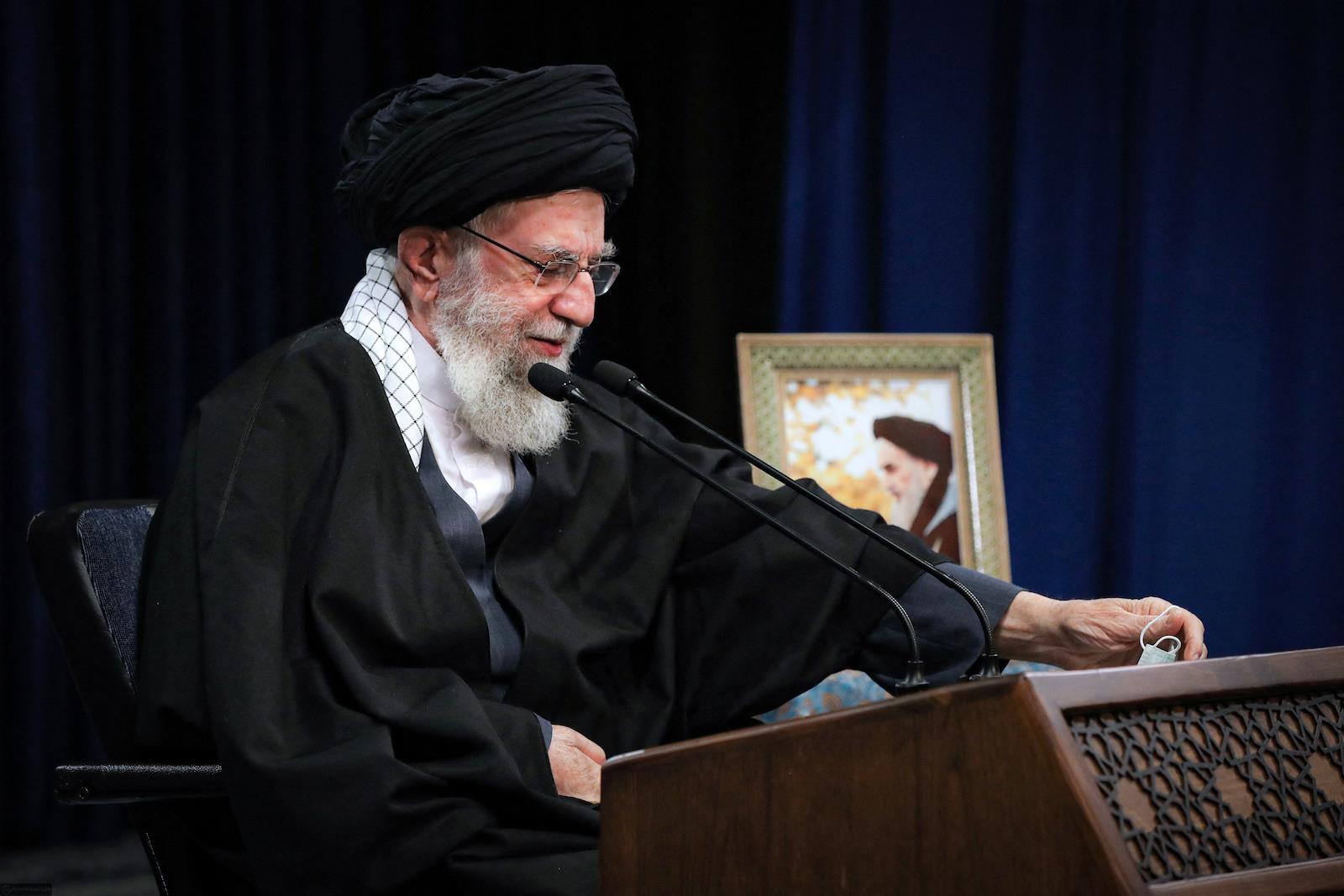 A handout picture provided by the Office of Supreme Leader of Iran Ayatollah Ali Khamenei on January 8, 2021 shows him speaking on the occasion of the 43rd Photo: AFP via KHAMENEI.IR

This is the Shiite arc – which develops in a complex “Iranization process” that is primarily political and religious and not cultural and linguistic. Outside of Iran, I’ve seen Arab Shiites in Iraq, Lebanon and the Gulf, Dari / Farsi Shiites in Afghanistan, Pakistan and India and Turkish-speaking Shiites in Azerbaijan look up to political Iran.

The large zone of influence of Iran is based mainly on the Shiites and not on Islamic radicalism or the Persian language. It is Shiism that enables political power in Iran to maintain a Eurasian dimension – from Lebanon to Afghanistan to Central Asia – and that reflects Grousset’s “continuity” when he refers to Persian-Iranian history.

From ancient history to the Middle Ages, it was always imperial projects born in Southwest Asia and / or the Mediterranean that sparked the attempt to create Eurasian territory.

The Persians, who were halfway between Mediterranean Europe and Central Asia, were the first to attempt to build a Eurasian Empire from Asia to the Mediterranean, but they were defeated in the 5th century BC. Stopped by the Greeks in their expansion to Europe.

Then it was up to Alexander the Great to venture into Central Asia and India in pure blitzkrieg mode and de facto found the first Eurasian Empire. Which in large part materialized the Persian Empire.

Then something even more extraordinary happened: the simultaneous presence of the Parthian and Kushan empires between the Roman and Han empires during the first two centuries of the first millennium.

It was this interaction that first made possible commercial and cultural trade and the connection between the two extremities of Eurasia, between the Romans and the Han Chinese.

However, the largest Eurasian territorial area established between the 7th and 10th centuries after the Arab conquests were the Umayyad and Abbasid caliphates. Islam was at the center of these Arab conquests, mixing up earlier imperial compositions, from Mesopotamia to the Persians, Greeks and Romans.

Historically, this was the first truly Eurasian economic, cultural, and political arc from the 8th to 11th centuries before Genghis Khan monopolized The Big Picture.

All of this is very much alive in the collective unconscious of the Iranians and Chinese. Because of this, the China-Iran Strategic Partnership Agreement is much more than just a $ 400 billion economic deal. It is a graphic manifestation of what the revival of the Silk Road is aiming for.

And it looks as if Khamenei had seen years before which direction the (desert) wind was blowing.